If the Asian Koels were too lazy to take care of their young, the Hornbills are the complete opposite and work in unique ways to protect and feed their chicks.

During the breeding season (normally March to April) Hornbills form pairs and return to breeding territories.

Here they nest in hollows of large trees. The pair will completely seal the entrance to the hole with droppings, mud and chewed pieces of wood with the mother inside!

Why? This protects the eggs and later chicks from predators.

The male stays outside. The female incubates the 1-3 eggs for 38-40 days, after which the female and chicks break down the sealed nest by pecking repeatedly.

Now the father who had stayed outside can bring food to his family! The mother also joins her mate eventually to feed the growing family. They do this for up to five months after which the chicks come out of the hole.

Look out for these majestic birds when you are out on holidays. India has several species of Hornbills.

The commonest one is the Indian Grey Hornbill which can be found throughout India except the desert and the far east regions. It is best spotted when flying from tree to tree. You will notice a large greyish bird just glide across your path. Difficult to spot once it disappears into a trees foliage.

If you are lucky you may even spot the highly endangered Great Hornbill which is huge in size….about 100 cms or 1 metre! 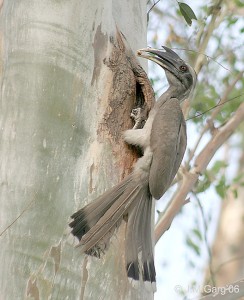 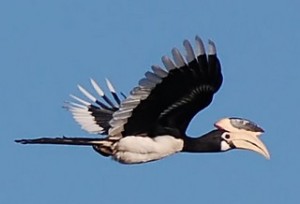 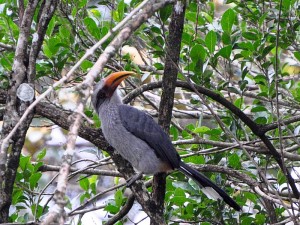 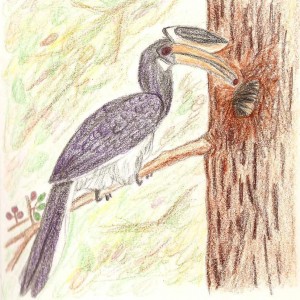