Lazy parenting by the Asian Koel

How would you like to be raised by complete strangers because your parents are too lazy to take care of you?

Well, that is exactly what the Asian Koel does!

Asian Koel belong to the cuckoo family and can be found throughout India. Chances are you may have seen or heard them already.

The male looks like a crow but has greenish white beak and ruby red eyes. The female is white speckled with brown marks. They are shy birds and prefer to hide among leaves but you would have surely heard the male’s very melodious kooouuu….kooouuu…kooouuu call that it will perform continuously during breeding season.

As parents though, they prefer to leave the hard work of feeding and taking care of their young ones to somebody else.

In India, the Koel usually targets the Crow for this free baby-sitting!

Here is how it pulls it off.

When the female is ready to lay the eggs it finds a nest of Crow with eggs in them. The male Koel distracts the Crow parents while the female quickly hops into the nest and lays its eggs and flies away before the Crows realize what is happening!

The Koel chicks usually hatch first. They grow bigger faster and get most of the food that the step parents bring to the nest. The poor crow never finds out about the trick that the Koel plays on it and takes care of the chick as if it were its own! 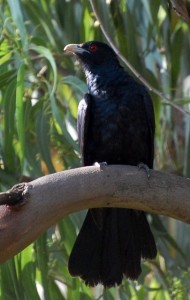 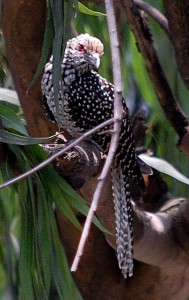